Opposition to inclusion of gender identity surfaces at MTSU 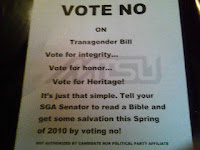 In November, we noted that MTSU President Sidney McPhee announced the inclusion of gender identity in the school's non-discrimination policy, after several weeks of student discussion. MTSU's move brings the policy into line with the policy of the Tennessee Board of Regents.

While the public mood has been largely positive in reaction to the change, some opposition has surfaced recently. Kidd Navarro, a student at MTSU, sent me of a photograph of the handout opponents have left around campus the last couple of days (pictured upper left)

Students who support the inclusion of gender identity are planning action to distribute pro-transgender information on campus in support of the policy tomorrow and in the following days.

It is not clear at this point who is responsible for the handouts or why the opposition is surfacing now. TEP stands in solidarity with the MTSU Amnesty International and Lambda groups who continue to educate the campus on the importance of including gender identity in the MTSU policy.
Posted by Chris Sanders at 10:17 PM 3 comments:

Fightin' Friday Music: Empire State of Mind for guess who?

ENDA, the role of the federal government, and Kerry Roberts

In light of the Obama administration's recent directives on barring discrimination against federal employees based on gender identity (sexual orientation is already covered) and recent talk that there may be movement on Don't Ask Don't Tell, I asked the question on Twitter, "...will that give them enough moral authority to move on ENDA [Employment Non-Discrimination Act]? I followed that with: "In other words, does fedgov need to be able to say, 'We've put our own house in order before moving into the private sector?'"

RT @tnequality Does fedgov need to be able to say, "We've put own house in order b4 moving n2 private sector?" // Fed should never b there.

I'm not wild about the content of the response, but I'll get to that in a minute. First, I should note that his position on ENDA won't differ much from current 6th District Congressman Bart Gordon's, although we may get the chance to find out otherwise if the House votes on ENDA in March. Second, I have to commend Mr. Roberts for responding, especially since I wasn't directing the question at him in particular. It's a refreshing sign of engagement.

Now for the substance of the response. I understand the anti-government perspective and I know that it's the kind of talking point that plays well with a huge chunk of his voters. But I followed up with questions that in all fairness he hasn't had time to answer. I asked whether he believes the federal government has a role to play in protecting people from racial and religious discrimination in the workplace. To the first, the conservative line used to be "No quotas." But getting beyond that and the now almost unreflective anti-government response, what's a conservative to say in such a situation? Would Roberts really say he favors dismantling existing employment protections? And even if he said he did, would he really act on those convictions?

I doubt it. But I hope I find out. And considering he was willing to reach out in the first place, who knows? I just might.

The hate for Harold Ford, Jr. was everywhere in the news, on the blogs, and on Twitter today. I noted that he was called a liar, a snake, and a snake oil salesman.

I would argue that the reaction is fundamentally misguided. Such an outpouring of scorn from the GLBT community is an important lesson to candidates and elected officials--If you have a past on our issues, it's over. You don't get another chance.

That is not the message we want to send when we are failing at the ballot and in legislatures (including New York!) on the marriage issue and when we're not advancing the Employment Non-Discrimination Act in Congress. If we show more passion for screaming insults at candidates who say they've changed their position than we show for doing the work of lobbying and persuading candidates and elected officials, we're in for a long fight.

People don't change their positions magically. They may do so in light of new opportunities (like a New York Senate seat) or because they see that the views of their constituents are changing. Or maybe friends or family members come out to them and change their minds. The important thing is that they change and follow through by supporting policies that advance equality.

Examples in Tennessee are rampant. Most of the legislators who were around in 2005 voted for the marriage discrimination amendment. Some of those same people have helped us on other bills since that time. Metro Council Members who were opposed to marriage equality and have legislative voting records to prove it were instrumental in passing the non-discrimination ordinance.

And, yes, Harold Ford, Jr.'s record on equality issues is bad. But if we offer him a claw when he reaches out to us, we're making a mistake. We ought to welcome the news and help hold him accountable for his new position. Isn't that the kind of change we need to see in order to win?

The closest statement I have found to this sort of constructive position came from the Human Rights Campaign:

“Congressman Harold Ford’s announcement this morning on the Today Show that he has reversed his position and is now in support of marriage equality for same-sex couples is certainly welcome news. However, it is also going to take more than an overnight conversion for our community to forget and forgive the two votes, one as recently as 2006, the Congressman made in support of George Bush’s Federal Marriage Amendment – an amendment that would have enshrined discrimination into the US Constitution. Not to mention, his outspoken support and personal declaration to vote for the constitutional amendment to ban same-sex marriages in his home state of Tennessee, and the ads he ran promoting his anti-marriage position during his 2006 senate race. These are actions that need to be remedied with a tangible commitment to move equality forward rather than hampering it."

Fair enough. It makes sense to greet a change of position with a degree of skepticism and remind everyone of the harm that has been done by past votes and statements. But the HRC statement leaves the door open for Ford to prove the truth of his words with deeds. No name-calling needed!

If he runs and gets substantial financial backing, we'd all better hope that he grows in his support of marriage equality and other issues. There's nothing wrong with making him fight for the support of New York voters who value equality, but if he does follow through, he deserves a hearing.

"Democrats throughout the South and in rural districts take positions on gun control, gay rights, and abortion that you suspect they don't really believe."

Hard to say, isn't it? And maybe that's the point--the ambiguity, that is. They believe that they can attract the conservatives and somehow speak in code to reassure the moderates and progressives in their districts.

But let's also recognize that there really are quite a few rural and Southern Democrats who truly are in sync with the majority of their voters on these issues.

It's such a tough call. On the one hand, if you ask a lot of Southern and rural voters their views on equality issues, they'll lean conservative. But if you ask them in a more neutral way what their top 3 concerns are, you wouldn't find many who would list same-sex marriage or any other equality issue. I don't see why we'd expect anything different from the candidates and elected officials. Moving them to the center on GLBT issues is a long chipping-away process. That happens to be true for Democrats and Republicans. And that's the way it will remain for the foreseeable future.

What the NRCC leaves out of the adoption story

Jeff Woods at Pith notes that the Associated Press chose to ring in the new year by reminding everyone that the NRCC is trying to pin the gay adoption issue on one candidate for Congress.

Woods explains why this is problematic:

Media outlets across the state, of course, picked up the AP report just as it is. No where is there any attempt to explain that, if Tennessee bans gay adoption, untold numbers of unwanted children--including those with disabilities and health problems--will languish in state custody and foster homes for years on end.

Here's an additional problem. There was no vote on adoption issue. You can't pin it on anyone other than the Senate sponsor, former Senator Paul Stanley. Neither party moved the bill. The NRCC isn't asking why the bill didn't move. The Senate majority leader didn't seem to push for it, nor did the Senate Judiciary Committee chair. What about the Caucus chair? Nothing. The reasons probably vary from individual to individual. But I suspect the price tag of the bill has something to do with it. It carries a hefty fiscal note. So to try to pin a position on one legislator is to ignore the more important context of the issue. The NRCC's own party hasn't chosen to advance the bill.