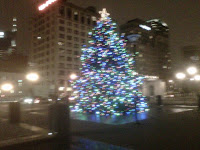 The holidays have come as they always do to Metro. The tree outside the Courthouse in full array was a wonderful sight for all the visitors in festive red making their way inside the building. Christmas get-ups? Nope. "Save My Fairgrounds" supporters in red t-shirts, but it somehow still fit the occasion.

After a long discussion about when to have a public hearing on fairgrounds issues, BL2010-823 came up. It would revoke Belmont's Rose Park lease unless and until Belmont makes some changes to its non-discrimination policy. Sponsors Mike Jameson and Jamie Hollin agreed to defer the bill indefinitely so that the Belmont community could have time to deal with that matter. Today's Tennessean perhaps gave a hint of things to come in an extensive interview with Belmont President Bob Fisher who appears to be attempting to make change. Until sexual orientation and gender identity are included in Belmont's written policy, the job will not be done in TEP's view. But it looks as if there is some positive movement.

In speaking on the deferral, Councilman Jameson previewed the other bill that he, Councilman Holllin, and Councilwoman Erica Gilmore (and hopefully additional sponsors) are introducing in January--a bill that would require vendors contracting with Metro Government to include sexual orientation and gender identity in their non-discrimination policies.

Legitimate, reasonable way forward: This bill offers Metro the opportunity to bolster its commitment to equality and diversity and to do so through a legitimate point of connection with the private sector--its contracting dollars. Opponents will look at the bill as "imposing" something on the private sector. But in our view, no one is forced to compete for Metro contracts. It's a privilege and all contracting procedures list standards. There's no reason that equal opportunity employment shouldn't be considered as one of those standards. It's reasonable that Metro tax dollars should achieve the added benefit of equal opportunity while meeting the basic needs of providing services. Furthermore, many companies have already adopted these protections. So would the burden be that great, after all?


Timing is everything: The fact that Metro elections are just around the corner makes the issue sensitive to many. We certainly wouldn't have chosen this time for the bill to come forward, but the situation at Belmont has made clear to the public that discrimination on the job still occurs. And it's hard to say whether the next Metro Council will be as progressive as the current one. So while many will argue that the timing isn't great, it's hard to argue for putting off dealing with discrimination. At least, we hope it will be. Time will tell. So we'll come back from the holiday truce and see whether Metro has the will to move forward. Nothing is certain at this point.