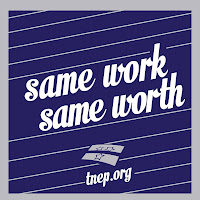 Sponsored by Commissioner Amy Broyles, the ordinance passed its second and final reading yesterday without debate after the Commission named a new County Trustee.  Knox County now becomes the fourth local government in Tennessee to protect its government employees from job discrimination based on sexual orientation and gender identity.  Metro Nashville in 2009, the City of Knoxville in 2012, and the City of Memphis in 2012 made similar moves.

Ben Byers, chair of the TEP Knox County Committee, notes the importance of the ordinance, "With no state or federal job protections for gay, lesbian, bisexual, and transgender workers, the county's non-discrimination ordinance is vital in guaranteeing fairness on the job.  It means that Knox County won't allow discrimination to get in the way of attracting and retaining talented employees."

Byers, who attended yesterday's meeting, was joined by a group of citizens wearing blue and stickers that said "Same Work, Same Worth" to show their support of the ordinance.