Is Crafton out of touch? Reminder about the Davidson Co Juvenline Court Clerk race 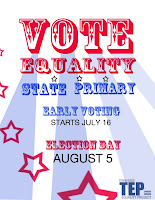 July 16 is the first day of early voting in State Primary, but it also happens to be the first day of voting in the County General. In one of the most hotly contested races David Smith and Eric Crafton are vying for Davidson County Juvenile Court Clerk.

Normally we wouldn't draw much attention to a race like this since the work of the Juvenile Court Clerk doesn't have a direct impact on policy related to the equality issues our community cares about. However, it's worth raising the question of whether Davidson County voters should reward someone who has consistently shown himself out of touch with our values with another election win.

*As a Metro Councilman, Eric Crafton voted against the 2009 Metro non-discrimination ordinance on first reading, second reading, and third reading. He wasn't content with quiet opposition. He spoke on the floor against the measure.

*He also led the effort to pass English Only in Metro, an effort that failed by a wide margin in January 2009 and was opposed by TEP.

Has he changed his views after these losses? The evidence is coming in. Earlier this year TEP asked the Council to seek a legal opinion on whether the Metro Human Relations Commission can gather statistics on discrimination in the private sector based on gender identity and provide educational programming on such discrimination. The legal opinion indicated that the Human Relations Commission could, in fact, do so.

*Last month, Councilman Crafton along with five other Council Members wrote a letter (linked at the Tennessean's politics blog) to the Human Relations Commission urging them not to use their authority to document such gender identity discrimination. Not only did they try to oppose the Commission's authority, but they also involved the socially conservative Alliance Defense Fund.

Make sure to know the facts before you vote. You'll have that opportunity July 16-31 during early voting and on August 5, which is Election Day.