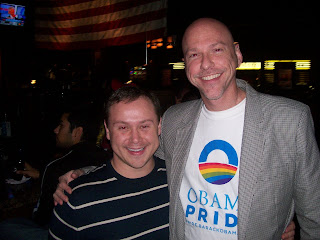 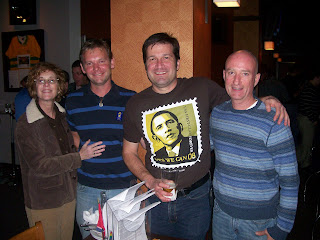 The GLBT community celebrated Barack Obama's victory around the State Tuesday night while watching with concern as the results from ballot initiatives around the country and legislative races in Tennessee rolled in. First, the celebration. The faces and shirts at Nashville's Tribe in the photos above say it all.

But the celebration was tempered by concern about ballot measures in other states. As of this posting, marriage amendments were leading in California, Arizona, and Florida. California is too close to call at the moment. The adoption amendment in Arkansas also appears headed to an easy win.

Around 9:30 some of us were getting word that Republicans were increasing their lead in the State Senate and possibly taking control of the State House. The Nashville Post is calling the House for the Republicans, 50-49, but there is no list. My two sources, one Republican and one Democrat, say as of now that the House remains in Democratic hands by one seat. I suppose we'll know later on Wednesday. There will likely be recounts. But either way, a legislative agenda that is amenable to the concerns of the State's GLBT community will be a tougher sell.

Looks like both the State House and Senate have turned Republican. See http://www.commercialappeal.com/news/2008/nov/05/republicans-control-both-state-houses-first-time-r/