$15,000 in pledges announced at Glasgow launch 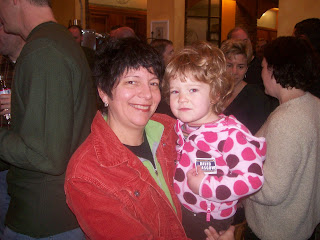 Maria Salas and daughter Owen were two of over 60 guests who attended the launch party for David Glasgow's bid for the 18th District Metro Council seat at Provence in Hillsboro Village tonight.

Glasgow announced that he had raised about $15,000 in pledges from nearly 100 contributors already--a formidable amount early in the campaign.

One of the volunteers said that about 35 yard signs had gone up this morning and more were handed out at the event.

Half a block away at the intersection where they had been on previous days supporters of John Ray Clemmons were holding signs for their candidate.

See also Out & About Newspaper and this link to more photos from the event.

Posted by Chris Sanders at 6:21 PM